A community vote on Schodack CSD’s 2020-21 budget will take place Tuesday, June 9. All voting will be by absentee ballot due to the COVID-19 pandemic, per New York State.

Like school districts across New York, Schodack CSD expects significant cuts to state aid due to the state’s $13 billion deficit.

The state budget froze Foundation Aid, the largest category of school aid, at 2019-20 levels. In addition, New York is weighing further cuts to state spending depending on how state revenues and expenditures look during the rest of the year.

Governor Andrew Cuomo has said further cuts to state spending could be significant after it examines revenues and expenditures at three points during this year.

Faced with this financial uncertainty, the goal of Schodack CSD’s 2020-21 budget is to preserve student programs and supports. The budget presented at this time does that but the situation may change depending on the depth of further state aid cuts.

“We have a very unclear picture for our budget for next year,” said Superintendent Jason Chevrier. “We will do the best we can to preserve programs but we have to be prepared for what the state will do and unfortunately that may mean reductions in the future.”

To reduce costs, additions to the budget that the district hoped to include were removed, a spending freeze has been initiated for anything not health or safety related, and the district plans to use reserves to help offset further state aid cuts.

Voters will also decide on two propositions, one to purchase two school buses as a part of the district’s long-term bus replacement plan, which accounts for a $3,000 net increase to the budget.

The second proposition would allow the district to use money from a Capital Reserve Fund for infrastructure improvements, which can only be used for such expenses.

There are also seven individuals running for three Board of Education seats on the ballot.

A table of budget revenues and expenditures is available here.

Board of Education Candidates Biographies 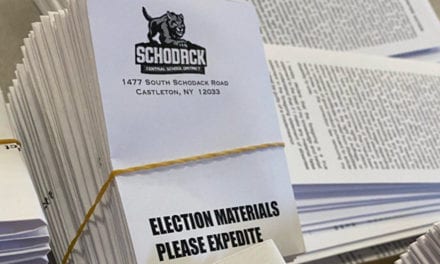 How Confidentiality of Absentee Ballots Maintained